Pending the release of her EP ‘The Present’ this autumn, we caught up with with Illicit Ghost to chat about her latest single, ‘Present’, her affinity to music from a young age, and channeling her mental health struggles into her music.

Music-making is generally accepted as a labour of emotional outpouring. And for Illicit Ghost, this is taken literally; “When I start a new song, it begins in one of two ways: I’ll either play around with sounds on Ableton to get something that I really like, or I will literally say how I’m feeling into my microphone and then build the track from there.”

Today sees the release of Illicit Ghost’s newest single, ‘Present’ – the title track of her forthcoming EP, ‘The Present’, written and recorded within New York City’s rocket-paced alternative pop scene. “Being in the city is a constant reminder to keep pushing forward. Everything is so fast here and sometimes it’s completely overwhelming, but luckily that inspires me to write. I’ve never felt like I wanted to make music that sounds like this or that. I hate reference tracks. For me, it’s all about feeling. If I can create a combination of sounds and lyrics that make me cry or smile, that feels right to me.”

With seven tracks already released on streaming platforms, her latest single, ‘Present’, is the third single that forms part of the four-track EP. Despite the avoidance of reference tracks, Illicit Ghost’s use of synth and assertive vocals cast reminders of the massive soundscapes created by St. Vincent or Lorde.

If each of her tracks is based on personal emotion, ‘Present’ dives into the beginning of working through difficult feelings and low mood. The identification of mood, “I’m just a little anxious / Just a little upset / Just a little tired”, moves to a more conceptual description of what feels wrong externally: “adjust to the dark / feel my way around / doesn’t make sense / can’t get inspired”.

It is simple but effective in its approach, building to a chorus that expresses: “I know the wind is whipping / But I can’t feel the breeze / And all these lips keep singing / Their silent symphonies”. This confession is repeated until pointlessness is overcome and, once again, Illicit Ghost can “know the wind is whipping, it’s time I feel the breeze”.

“It is important for me to [work through my emotions in my music] because my anxiety and OCD were affecting my ability to be productive and to function properly. I want to be the best I can not only for myself, but also for the people around me. It’s important that I do the internal work so that I can let go and live my life and maybe even have fun.”

Illicit Ghost is aloof when it comes to the question of her name. In 2018, she already had people in real life who only referred to her as ‘Illicit Ghost’. Her chosen moniker, like her music, comes from a place of emotional openness; “I used to feel like my emotions weren’t valid and that I shouldn’t express them. I came of age when mental health was taboo. I believe that we all have a ‘ghost’ inside of us that maybe we hide because we’re ashamed of what we’ve been through. I want people to know that it’s OK to be open with your feelings, because the chances are someone else is going through the same thing.”

In any case, Illicit Ghost does not exactly owe any information as she remains happy to share her mind’s inner workings when it comes to “laughing in the face of rejection (‘Wide Open’), attempting to overcome my own anxiety and OCD (‘Present’) and my struggle with food (‘Rabbit Hole’).”

Releasing a shorter EP with the idea to “give my listeners a sense of my music without overwhelming them with a full album” but remain “a collection of songs that mean something to me as a whole”, Illicit Ghost is hardly a novice when it comes to her experience. She started learning violin at the age of three, quickly took up clarinet and piano in elementary school, and acquired the guitar a little later on. “One day in middle school I decided I wanted to try to write my own music, so I sat at the piano and tried random chords. I began recording myself on an old PC, it had a microphone and a voice recorder so everything was on the same track. I had no idea what I was doing, I just wanted to get my idea down. I eventually began recording my songs in GarageBand on my iPhone. I didn’t know it at the time but I was “producing” my songs on there, recording string parts and my vocals and playing around with sounds.”

From there, she began playing open mic nights in NYC and watching production tutorials on YouTube in her spare time to develop her skills in recording. “I decided that I’d save myself a lot of pain in the future if I gave music a real shot instead of wondering ‘what if’ later on. Even now, I don’t have a PR team leading the charge, and doing all the producing, recording, engineering, writing etc. is a huge undertaking, but it’s all worth it to me. I honestly never thought I’d get to this point.”

Not knowing anyone in the industry, Illicit Ghost threw caution to the wind and began “to send my songs around cold to producers to see if anyone wanted to collaborate. I met a handful of really wonderful people in New York who were vital to helping me find my way. I met up with Josh Winstead of Metric who helped me learn production. I also spoke with Eric McLellan who was at the time working as Director of A&R at Sire Records who recommended I contact Elliot Jacobson [who works with Vérité, Allie X and Elle King], to see if he’d be interested in working together. We met up and instantly became good friends and then started collaborating a few months after that on my first release ‘Drunk and Alone’. We’ve been working together since then, and I feel really lucky that he is on my team.” She professes deep gratitude to those who have given time and advice throughout the early budding of her career.

For the ‘The Present’ EP, her attitude is no different: “From the beginning, I’ve been collaborating with Elliot Jacobson who is an incredible mentor, producer, drummer, manager and all-around creative person. He’s been there every step of the way in this process, has helped me to learn production over the past years, and encourages me to keep pushing myself musically. In quarantine, we’ve been sending stems back and forth and writing together virtually. Mike Tuccillo, another wildly talented mix engineer and producer, has also been instrumental in the process. We all understand each other really well which is rare to find. I feel really grateful to have them on my side.”

Finding your people is of paramount importance when it comes to music collaboration and, in a place like New York, difference is as much a strength as a root of disagreement. “I’ve been lucky to find close friends and collaborators here. I’m used to being alone for long periods of time. Before quarantine, I was spending my time recording and writing by myself. I like being on my own, I have so much anxiety about being around other people. I force myself to go out for a walk every day to get some air. There are some days where I have no energy to do anything and I can really wear myself out mentally, but I have the tools I need to get myself back to a functioning place. Having a great support network is helpful and keeps me motivated.”

Dead set on the importance of maintaining control over her anxiety and OCD, Illicit Ghost notes, “if I didn’t take care of myself, I wouldn’t be able to make music. I want to try to help people who are also struggling, so I started a show on Instagram Live called ‘Anti-Anxiety Hour’. I invite artists featured on my ‘Anti-Anxiety’ Spotify playlist on the show for a live conversation about music and mental health. It feels good to create a community where we can openly speak about what we’re going through and connect with each other through music.”

Despite the deeply personal nature of her music, it is the community around her that makes it what it is. Whether that be collaborators or listeners, the vulnerability of Illicit Ghost is given meaning by the people around her. Able to overcome anxiety enough to put herself into her music is a feat in itself. Proudly holding the titles of producer, pop artist and performer, Illicit Ghost will remain doing her thing whatever the weather and whatever the season. 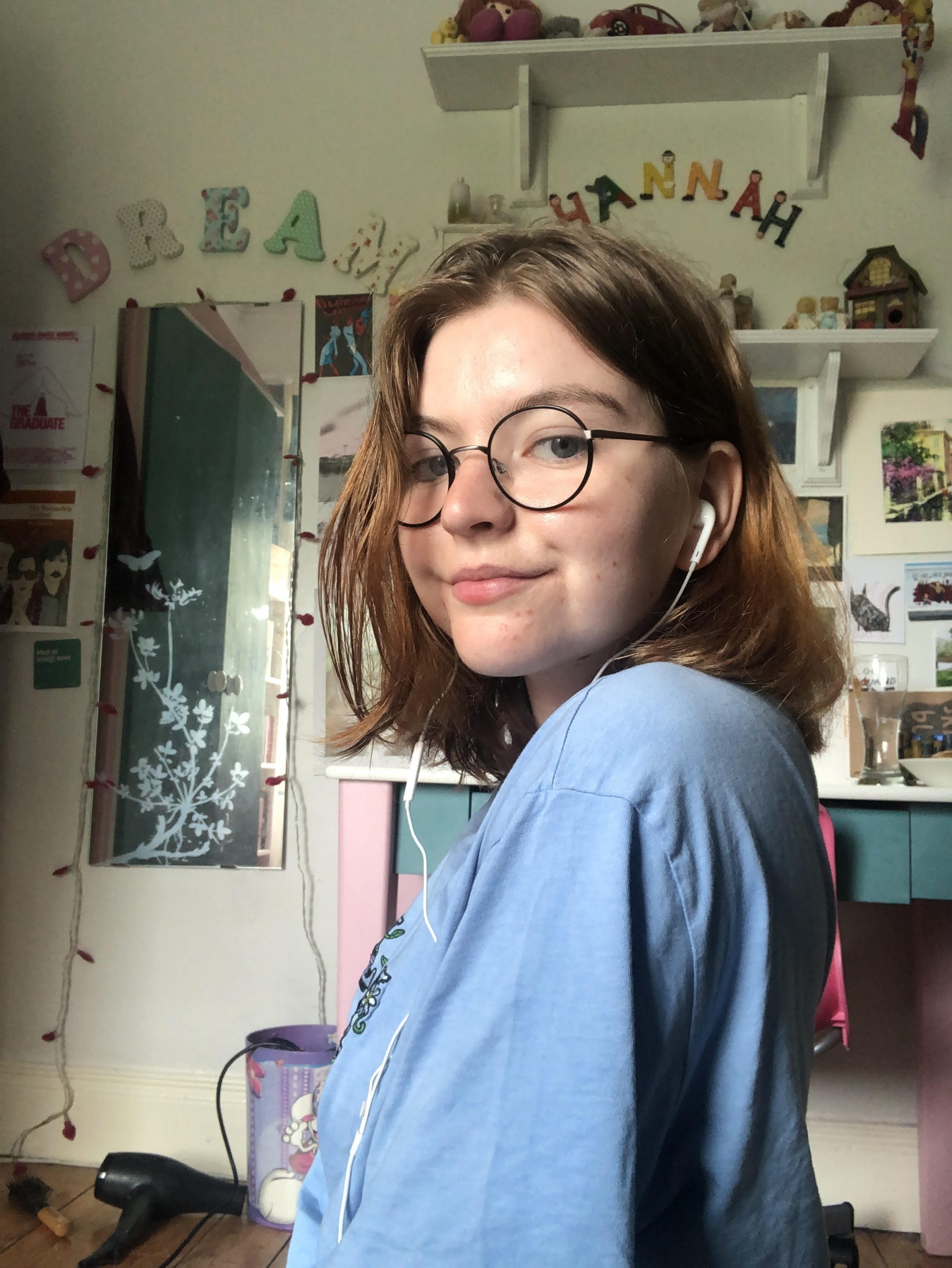 H. R. Gibs, also known as Hannah Gibson, is a freelance writer based between Belfast and Dublin. Rarely staying put for long, she looks forward to the day she makes a cup of tea and remembers to drink it before it goes cold. Hannah can be found on twitter @hrgibs.